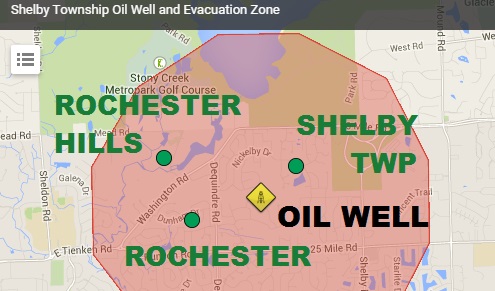 The residents of Shelby Township, Michigan, learned this week that an oil and gas well will be returning to their community.  The oil well, which is operated by West Bay Exploration, is to be placed 457 feet from the nearest home.  This is the first oil well of it’s kind to be placed in a high density residential area in Michigan.  West Bay Exploration has plans for more in the area.  The residents of Shelby Township, and neighboring Rochester and Rochester Hills, are concerned about the impacts and risks of having an industrial operation so close to their homes.  Despite the assurances of the oil industry and state regulators, they are afraid that accidents will happen.  There are many examples to validate their concern.  Here are some:

These type of accidents, if they occur in densely populated areas, pose a greater risk to human life.  Residents of Shelby Township, Rochester, and Rochester Hills are also asking how close their homes have to be to this oil rig to be at risk.   In the interactive map below we identify the location of the oil well located in Shelby Township and depict the possible evacuation zone with a 1.5 mile radius from the site.  The evacuation zone stretches from Shelby Township west into Rochester and Rochester Hills, and north into Stony Creek Metropark.

We encourage you to voice your concerns to your city and state officials.  Tell them that industrial operations do not belong in residential areas.  You should also ask your local officials if they have an emergency plan for accidents occurring at well sites in high density residential areas.

Don’t Drill The Hills is fighting to keep our residential areas… residential.   We need your help.

If this information was helpful, please donate $1 so that we may continue.
We cannot do this without your help!