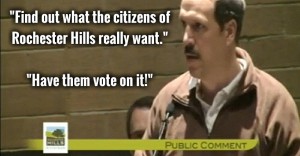 Let’s have them vote on it.

“I would like to see somebody to take a stand of leadership.”

“I don’t know that a majority of the citizens of Rochester Hills don’t want oil drilling under their homes. I suspect it, if I were in Las Vegas, I’d bet on it.”… “I know a way to find out.. put it to a vote.”

“Let’s find out what the citizens of this community really want…. Let’s have them vote on it.”