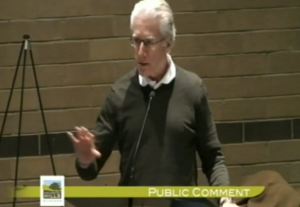 As you listen to Mike’s speech consider these points:

1) “Without your active participation, Rochester Hills neighborhoods will have oil and gas horizontal drilling the likes of which you see in Texas.”

2) “The apathy that exists in Rochester Hills has resulted in deals with the oil industry to frack” Just Google “Frackng” to find out what it is.”

9) “Residents’ safety and investments take a back seat to interests of big oil in Rochester Hills as Mayor signs agreement to allow gas and oil drilling.”

Awaken from Apathy – now is the time you can make in impact in your community – Start by attending the City Council meetings.

The founding documents include the concept that no man has the right to control others.  That every person has equal opportunity compared to every other person.

I, along with many here tonight, have not been very active politically over the years. We tend to take things (like the founding documents for this nation) for granted. So responses to most things that take place and are decided here are apathetic.

Apathy is sinister and it grows like a cancer.  Apathy grows into this idea that people exist to provide elected officials with official position. But if we go back to original idea that became The United States of America…then we would all come around to what was originally intended — that an elected position exists to serve and protect the freedoms of the people who elected them. This is what the founding fathers of this country intended and documented in the Declaration of Independence and the Constitution.

Our Founding Father’s understood human nature.  They observed that there is evil in the world and that evil will lead to man constantly trying to take control of others.  Thus, as stated in The Declaration of Independence…..”That to secure these rights, Governments are instituted among Men, deriving their just powers from the consent of the governed.”  In other words, there is a need for government to manage some affairs that are beneficial to all and those affairs are best managed by an entity elected by the people that have limited control over these affairs. In America that control is limited and is granted to government by consent of the people who elect their representatives.

So in many ways I am grateful for why we are here.  Because thanks to apathy, money, a lack of decision making transparency here, Jordan Oil, and this whole issue of drilling for oil and gas in high density residential areas, I sense a strong and growing determination building to support tipping the balance of power back to the people.

My hope is that tonight and every other Monday night the people will come forward to assert their voices and their rights to make sure that they tip it back. Getting Jordan Oil out of our communities, Rochester Hills and our back yards will be that first step toward shedding apathy.