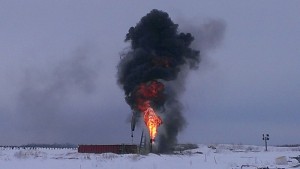 An oil well fire occurred on March 9, 2014 near Kingsley, MI. Rick Henderson, the DEQ field supervisor, said he was ‘reasonably sure’ the fire was due to a mechanical problem. He also stated that, in order to clean-up “they’ll probably have to remove some soil…but we [won’t] know the full extent until they get to it.” Henderson optimistically stated “inspectors expect no lasting environmental damage.” Thankfully, unlike the February 11, 2014, Bobtown, PA fire, no one was injured or killed in the Kingsley fire.

Don’t Drill the Hills notes that this well was obviously in a rural location (see photo), and obviously accidents do happen. Do we want those accidents in high density suburbs?