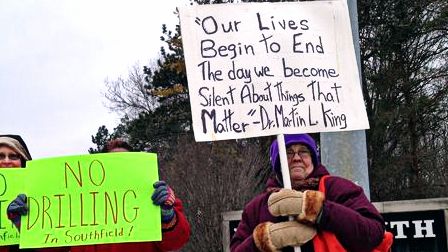 Jordan Development, an oil company, has applied with the Michigan DEQ for a permit to drill for oil and gas at a church, Word of Faith, in a high density residential area of Southfield, Oakland County, Michigan.

Images below are from the permit application 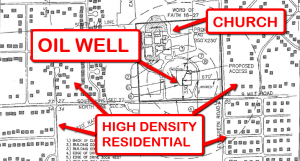 The method that will be used to extract oil and gas from this well is “Acidizing”.

The methane and chemicals not captured in tanks will be “flared” into the air subjecting nearby residents to the toxins.

Acidizing is a process in which a combination of hydrochloric acid and other acids are mixed with brine and other chemicals and injected underground to either clean out a well or to dissolve oil bearing rock to enhance production of oil and gas. Once the acid, chemical, and water mixture has been pumped into the well or formation, oil flows
to the well more freely.

According to this report, the acidizing process releases more toxins into the air than the similar process commonly referred to as ‘fracking’…
“When it comes to the these air toxic chemicals, the report found that the majority were reportedly used during the acidizing process — a process in which hydrochloric acid and other acids are mixed with brine and other chemicals to clean out a well or dissolve rock so that oil can be extracted.”

HOW TO SEND COMMENTS TO THE DEQ

The Michigan DEQ is accepting public comments to consider when reviewing the application.  Email comments asking the Michigan DEQ to DENY the Southfield drilling permit.

The deadline for public comments is Monday, January 18, 2016.

Some comments to consider for inclusion in your email request :

Simply telling the DEQ you don’t want a natural gas or oil well will not make a difference in their permitting decision.  But you may make a difference by sharing information about the local on-the-ground conditions that you know about.  You may also make a difference by asking questions about a permit, about how it may be designed to specifically protect you and your community, or a special natural feature or resource, from pollution and potential harm.

Here is a link to the application document for the Southfield well: Word-of-Faith-16-27-Application-2b

Let us know you sent your email and join into the conversation on Facebook: https://www.facebook.com/dontdrillthehills/posts/1275362855814247