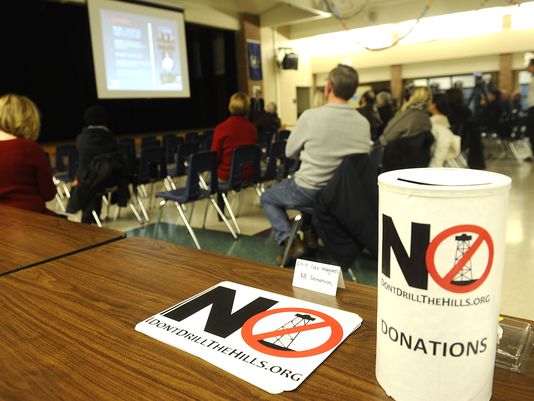 On February 9th, 2015 DDHI held a Membership meeting at Van Hoosen Middle School. This members-only meeting intended to provide DDHI members an update on 2014 activities and a path forward into the future. The meeting covered old strategy, timeline 2011-present, point/counterpoint on what we are hearing from the City of R. Hills, a lawsuit update, question and answer period, and volunteer sign-ups. For those who could not make it the slides are available here (link), and we may post video in the future. A Detroit News reporter was on hand and their story is posted here. The story focuses on the bigger picture of drilling within Michigan, rather than the meeting itself.

Simultaneous with the DDHI meeting, a R. Hills City Council meeting took place at City Hall. There were three different final agendas, some included a vote to extend the current oil and gas drilling moratorium, some did not. These multiple agenda changes make it impossible for the public to discern when and where they need to be – which may be the overarching council intent. It’s certainly no way to run a transparent, public operation. Peoples’ time is precious, and should not be wasted going to meetings that do not address the posted agenda or their specific needs.

Fortunately, Councilwoman Stephanie Morita forced the moratorium back onto the agenda and a vote to extend an additional six months passed. While Ms. Morita’s efforts are appreciated it is important to note moratoriums remain weak legislation, which oil/gas companies have ignored in the past. Well-crafted ordinances are required to further protect the city and its residents.

City of R. Hills ordinances, which were initiated last April, [Note: DDHI provided substantial suggestions and draft materials even before then] are still not complete. Also, the City’s draft ordinances are merely restatements of DEQ regulations with no additional protections. Meanwhile, the City of Auburn Hills, performed due diligence and installed protective ordinances within six months – including negotiating an explicit agreement of West Bay Exploration, the primary oil/gas company involved. The cities of Rochester and Troy are close to finalizing their ordinances – exercising zoning powers available to cities to protect residential areas. Shelby Township has hired one of the state’s top legal experts on ordinances to craft theirs.